The present church is a late Georgian building erected in the last decade of the 18th Century and consecrated in September 1797.

St Mary’s Church, rebuilt by Act of Parliament in the 1790s replacing an even larger medieval building, is Banbury’s only Grade I listed building and its most conspicuous landmark. It was the largest parish church built in England in the 18th century, and remains among the top 1% in terms of size.  It has been identified as a ‘major parish church’ by the Church Buildings Council.

The main body of the church was built in 1790-97 to a design by S.P. Cockerell, the tower and portico being finally completed in 1822.  The interior was remodelled in the 1860s and 70s by Arthur Blomfield, with stained glass windows and wallpaintings by Heaton, Butler and Bayne, including major artwork by the highly talented pre-Raphaelite artist Alfred Hassam (1842-69). 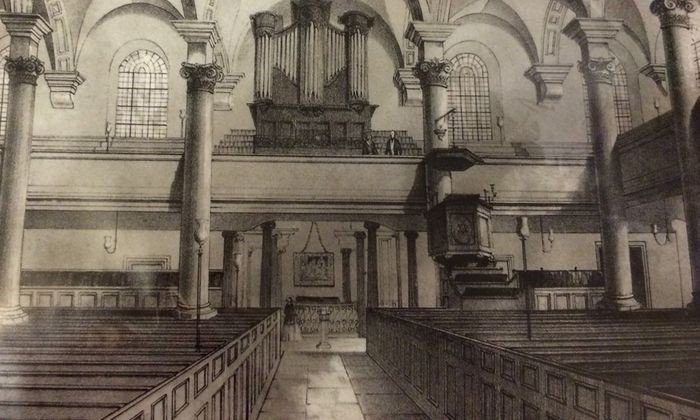 Built to seat 2,500 worshippers, the church comprises a 90ft (27.5m) square auditorium, originally galleried on all four sides, a substantial forebuilding that embraces the tower and contains a circular vestibule and the principal staircases, and a small chancel with attached vestries.  It was transformed internally in 1874 when the chancel was raised to the full height of the church, an apse was introduced within it and it was integrated with the rest of the church by the addition of giant ionic pilasters replicating the columns that support the central saucer dome.  The functional chancel was extended out into the main body of the church, originally defined by low walls (cancelli) modelled on those in San Clemente in Rome.  Like the cancelli, the associated decorative scheme was entirely Early Christian in inspiration, and is dominated by a faux-mosaic in the apse of the twelve apostles, surmounted by Christ in Majesty in the semi-dome above.

To the south of the churchyard is St Mary’s Church Centre, built in the 1980s to provide a separate community hall; the parish office and a small meeting room are on the upper floor. The Centre is currently used by a range of community groups, including the Beacon Centre, a drop-in centre for homeless and marginalised people that opens four mornings a week. There is limited car parking available in this area.

The churchyard itself is now closed and under the care of the Town Council. Jonathan Swift apparently drew inspiration for the name of his hero from Banbury: in the preface to the 1726 edition of Gulliver’s Travels  he writes: “Although Mr. Gulliver was born in Nottinghamshire, where his father dwelt, yet I have heard him say his family came from Oxfordshire; to confirm which, I have observed in the churchyard at Banbury in that county, several tombs and monuments of the Gullivers.” No ancient tombstones survive to bear out the story, but modern ones can still be found.

Above the High Altar – in the dome of the apse, is depicted the Vision of the Throne of God from Revelation chapter 4: the rainbow, the four and twenty elders, the four living creatures, and the seven lamps symbolic of the Holy Spirit.

The stained glass is also of Blomfield’s time, the most striking windows being those at the eastern end of the nave above the galleries – by an unknown artist. The upper windows in the gallery represent scenes from the life of Jesus – 30 illustrations in all, while the lower windows illustrate 10 of his parables. The detailed background in all the windows well repays attention. In the second upper window on the north side is the well-known Arctic window in memory of the explorer Admiral Sir George Back, which contains sketches from his notebook – H.M.S. Terror caught in the ice, Eskimos, polar bears, seals, reindeer, walrus and a surround of snow flakes.

The chapel on the left perpetuates the name of the Resurrection Chapel from the mediaeval church. It contains several war memorials and a Lamp of Brotherhood brought from Monte Cassino in 1964, one of 84 throughout the world, and the first in this country.

Bells The forces exerted on the tower by the bells made the ring unsafe by 1928. All eight bells were removed and recast into a lighter peal of ten bells. ln 1930 they were returned to be re-hung in a cast iron frame on steel girders lower down the tower. Two half-tones are also present as part of the Carillon. The inscription originally on the oldest bell, the tenor cast in 1667, has been retained on its replacement. Other original dates are retained.

Organ Built by Byfield, Wilcox and Knight in 1765 for the old church. Since then it has been heavily modified several times. It bears the name of Snetzler but there is no evidence for this attribution. It is not the only Byfield organ linked to the name of the famous organ builder.

In 2002 the chancel was extended forward to create a stage, facilities for those with disabilities were added, emergency lighting and toilets were added and the church was redecorated. St. Mary’s is now both a place of worship and a resource to the community for performing arts.