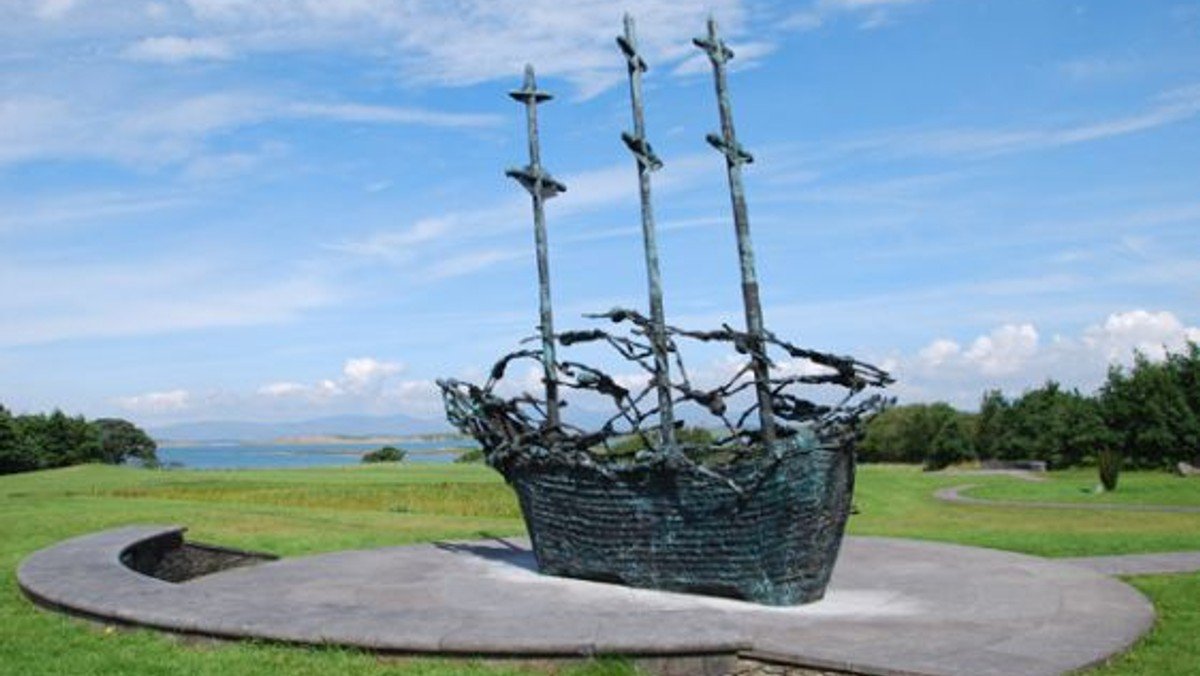 In Westport, Co. Mayo, on the west coast of Ireland, there is a remarkable piece of public sculpture. The stark and striking monument is an appropriate commemoration of the millions who perished in the Irish Potato Famine over one hundred and seventy years ago. Crafted in bronze by John Behan, this dramatic sculpture depicts a ‘Coffin Ship’, with skeleton bodies streaming in the rigging (see photo). ‘Coffin Ship’ was the term used to describe the ships which left the Irish shores horrendously overcrowded with emigrants fleeing to America to escape the famine. The dire and unhygenic conditions on board ensured that many did not reach their destination.

The National Famine Monument was unveiled in 1997 by the then President, Mary Robinson. Clearly the historical and emotional context is very different; but I wonder if this could be a creative solution to the problem of statues, so much in the news this last week? Instead of destroying memorials to important philanthropists with chequered pasts, in a gesture which seems to come dangerously close to revisionism, we could instead construct new monuments, similar to the ‘Coffin Ship’, drawing public attention, in a spirit of acknowledgement and penitence, to the slave ships which contributed so hugely – and so terribly - to the wealth of great trading cities like Bristol, London and Liverpool.

It was the former captain of a slave ship, John Newton (1725 -1807), who in the late 18th century wrote the hymn ‘Amazing Grace’.  My book of ‘Favourite Hymns: 2000 Years of Magnificat’ describes Newton as ‘the most unclerical person to take holy orders in the eighteenth century’. He led a colourful life, oscillating wildly between extremes of swashbuckling vice and Christian devotion. For some years he worked on a line of slave-trading ships, until in 1754 he became a convert to Evangelicalism, offered his life to God, and thereafter served as vicar of Olney for 17 years. During this time he was an important influence on William Wilberforce, whose tireless campaigning for the abolition of slavery is the subject of the 2007 film, Amazing Grace. Wilberforce was himself a devout Evangelical, and most of those who worked with him were also driven by a profound Christian faith. While Wilberforce was the inspirational figurehead of the movement, the film demonstrates how many committed individuals had to work together over years before they could realize their aim (and in the end, the turning-point was provided by a clever economic strategy devised by a lawyer!).

You may have seen the online version of ‘Amazing Grace’ which was used at the beginning of the Diocesan service on 7th June. ’50 Covid-affected countries sing Amazing Grace’ showed a gradual build-up of voices and images in a Zoom-style montage, as participants from different countries across the world, singly or in small groups, joined together in their own languages in Newton’s unfailingly uplifting song. It’s a fine image of how we can best work for change. By 1797, in poor health and addicted to laudanum, Wilberforce felt he had failed in his mission. It was only through the support of others, and their different strategies and perspectives, that the campaign to outlaw the slave ships came to fruition in 2007 (Newton lived just long enough to see that happen) – and even then, the Slavery Abolition Act, freeing all who had been enslaved, was not passed in the British Empire until 1833.

Dorothy Day (1897–1980), the founder of the Catholic Worker movement, also points to the cumulative effect of many small efforts for the greater good. Inspired by the miracle of the Feeding of the Five Thousand, she called her book about the movement Loaves and Fishes. She wrote, ‘Young people say, What good can one person do? What is the sense of our small effort? They cannot see that we must lay one brick at a time, take one step at a time; we can be responsible only for the one action of the present moment. But we can beg for an increase of love in our hearts that will vitalize and transform all our individual actions, and know that God will take them and multiply them, as Jesus multiplied the loaves and fishes.’

‘All things work together for good to those who love God’ (Romans 8:28). May we also know that ‘increase of love in our hearts that will vitalize and transform all our individual actions’; and may we too live to see the change we desire.

[Information about the Famine Monument taken from www.mayo-ireland.ie.]