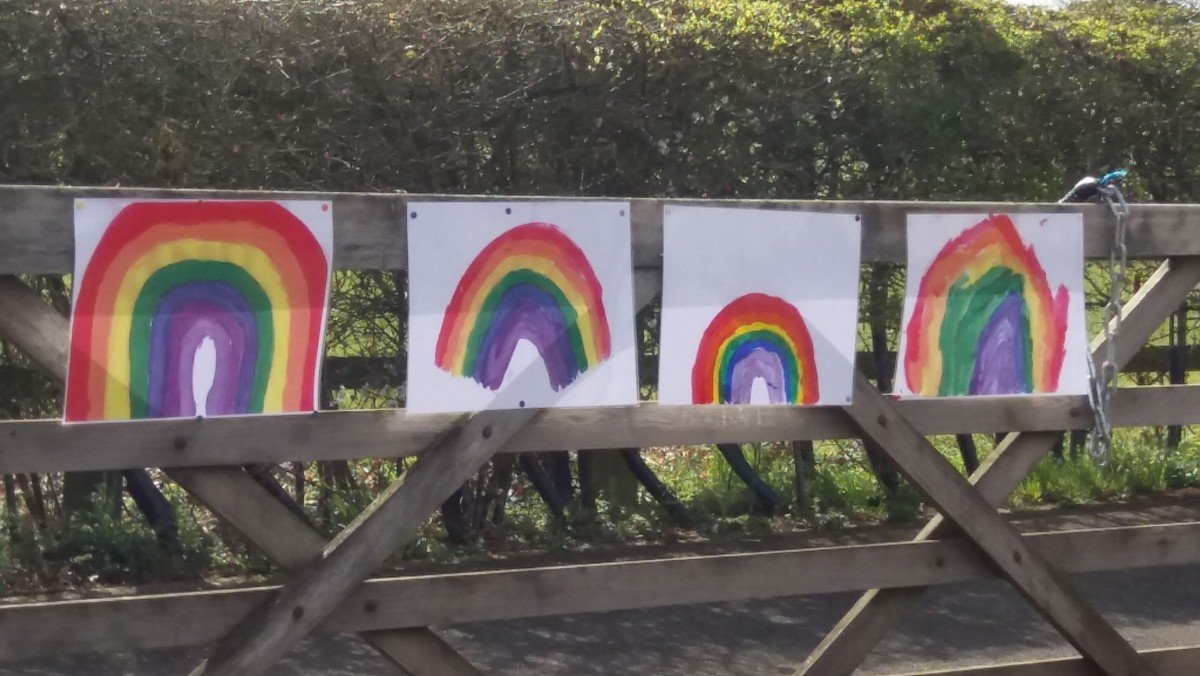 On Friday I saw my brother for the first time in nine weeks. We met in a car park in Stratford, and went for a walk together along the River Avon and the Stratford Greenway in the sunshine. We spent five hours or so in each other’s company, and during that time we were never less than a metre apart; we sat at either end of a wooden bench to eat our lunch, having each prepared and brought our own food. We avoided passers-by – who avoided us in their turn – and only touched objects (gates; stiles; the car park ticket machine) when there wasn’t any choice. I don’t think I’ve ever spent any time in my brother’s company before without giving him at least one hug, and I drove home again feeling as if I had been inhabiting a parallel universe.

Which, of course, in a sense, I had. The last two months have forced us all to become familiar with the virtual world, and even those of us who have had to be dragged kicking and screaming into the 21st century are grudgingly recognizing the benefits of online encounters and social media, Zoom classes and YouTube videos. St Mary’s has benefitted hugely from behind-the-scenes activity by Steve Hearn and Stephen Birch, who have facilitated weekday services and Sunday coffee sessions, kept the church website going and kept the Leadership Team in contact with each other. What my husband rejoices in calling ‘Vurch’ (Virtual Church) has helped many in our congregation to maintain a sense of community, particularly precious, I imagine, to those who have been living on their own these past weeks.

And that’s something that has been replicated across the country, and in some cases has even led to a renewal of energy and commitment which can only be welcomed. But it’s worth sounding a note of caution about this brave new world before enthusiasm carries us away. Firstly, not everyone has broadband. Not everyone can afford broadband, either: I was shocked to hear in a news item that some households are facing a difficult choice between staying connected or putting three meals a day on the table. Also, not everyone has the appropriate electronic devices: a whole family may have to share a single laptop, or children may need to use Mum’s phone, for example, to participate in online schooling. More trivially I have become aware that using Zoom forces me to become conscious of my own appearance in a way that the telephone never does (a particular bane when desperately in need of a haircut!). I suspect the social media generation came to terms with this long ago; but positioning the computer’s camera to avoid the unflattering light or the double-chin angle can be an undesirable distraction from what you or the person you are talking to is actually saying.

Most importantly, though, it seems to me that Vurch is an incarnational issue. I can’t count the number of times in my chaplaincy work when patients said to me – justifying a faith that was often only lukewarm – ‘You don’t have to go to church to be a Christian, do you?’ For many years I bit my tongue; but latterly I found it much more difficult to let this pass. No, of course God doesn’t keep a register, and faith and good works thrive in many different contexts; but actually yes, to be a Christian you do have to go to church. As we approach Pentecost (May 31st) and the church’s birthday, it’s worth revisiting the fact that the meaning of the word ‘church’ is ‘the gathered people of God’ – and ‘where two or three are gathered together in my name’, Jesus says, ‘there I am among them’ (Mt. 18:20). It’s absolutely not about monitoring attendance and earning credits. It’s about recognising our shared identity as the people of God, the Body of Christ; about leaning on each other for support, encouraging one another, building each other up (which is what the word ‘edifying’ actually means). We need each other when we wobble in our faith in this unkind post-Christian world. And we also challenge each other simply by our difference, reminding ourselves that whatever our funny little ways, we each have something to give. There is, as the Quakers say, ‘that of God in everyone.’

But this interaction will never happen in the same way in online communities. Because nothing beats the physical presence of other people you can see, hear, smell and touch; people sitting in the pew in front of you, or walking past you; people coughing, wriggling, rustling bits of paper. There is an immediacy to the experience of hearing someone read or pray while others are silent; an intensity to singing as one person in a congregation which you will never achieve by singing along to your computer.  There is a sense of companionship in kneeling next to someone else, an awareness of community in the sharing of the Peace which is about looking into someone’s face while you shake their hand.

And of course, there is the ritual and gesture of the Eucharist, our focal shared experience, which begins and ends with the ‘re-membering’ of a body, taken, blessed, broken and shared. The body and blood of Christ, offered through bread and wine, which we take into our bodies in order to become a part of the Body of Christ. Whatever your personal theology, one thing we are all agreed on as members of the Church of England is the idea of ‘real presence’: that in the moment of communion, Christ is really present in the bread and the wine. Not symbol, but substance. Encountered, experienced – body to body.

It’s perhaps an appropriate thing to be musing on in this time between Ascension and Pentecost. It must have been hard for Jesus’s disciples to get used to encountering his resurrection body – which could pass through locked doors, and come and go at will; which could be sustained by food, and bore the marks of suffering upon it, but was not to be touched. How much harder, though, to manage without that strangely different body altogether, to experience, however briefly, ‘real absence’. When Jesus was caught up into the cloud at Ascension, the disciples’ sense of loss must have been unbearable, a kind of double bereavement. They had lost him once to mortality, and now they have lost him again, to eternity.

‘God does not leave us / Comfortless’ writes Jane Kenyon in the poem ‘Let evening come’, and it is true. Pentecost is only a week away. A ‘new normal’ will come. But there are times in loneliness and isolation when comfort seems very far away – when you haven’t been in the same room as another human being for weeks, when you can’t remember what it feels like to hug and be hugged. Virtual hugs really don’t cut it. Faith doesn’t mean we cannot lament.

And so let me be the voice of lament today for the hugs we cannot share with our brothers and sisters, with parents, children and grandchildren, spouses and friends. For the Peace we cannot share in our churches, the dismembered Christian body we are at present. For the hands we will never hold again in this life. For the time we must sit out behind closed doors, waiting.

Mary P
Monday, 1 June 2020 11:58
Thank you Louise for your wonderful insight, as usual.
Heather Clews
Monday, 25 May 2020 22:20
I am one of the fortunate ones who has access to electronics...... but I am living alone and it's day 70.... fleeting sight of family..... and no human touch to cherish .... I live by the thought of morning prayer live from Worcester Cathedral at 8.30a.m and I am beginning to feel part of that virtual community..... it's warm and kind and ever present...... immensely better than the news! There are so many at St Mary's who are unable to access the on line services, but I am encouraged by the innovation, and the massive effort to create these services for our church in Banbury. Looking forward if I were housebound or in any sort of care how wonderful it would be if I could have the comfort of knowing that we had learnt from this test run about the possibilities that may lie ahead of still being able to be part of the church community I know and love. I wish I could help to connect more people now, praying with others, and sharing in the love of God is the greatest blessing....